Why was Staphylococcus epidermidis the major microbe on the body of Jesus after death?

Over 1000 species of bacteria are known to be part of the human skin microbiome. However, the evidence indicates that Staphylococcus epidermidis would make up the majority of the bacteria present on the skin of Jesus when his body was wrapped in his shroud for burial. How can this be known?

A number of conditions must be met for this to occur and these will be explored here. First, it is assumed that the skin microorganisms on the body of Jesus were similar to that of present day humans. S. epidermidis is a major bacterium of the Firmicutes phylum found on human skin. It is a Gram positive coccal (round) shaped bacterium found in grape-like clusters as shown in the slide below.

It is considered part of the normal microbiota on human skin and prevents more pathogenic microbes from establishing residence. However, under certain conditions, such as an indwelling urinary catheter, S. epidermidis can attach to the catheter surface and grow eventually entering the blood and causing infections. S. epidermidis attaches to the skin and catheter surfaces by producing extracellular polysaccharides that are extremely sticky and attract water. It is estimated that water on a weight basis comprises 97% of the total weight of the polysaccharides. Most bacteria do not produce the type and amount of polysaccharides produced by S. epidermidis which explains why this bacterium is only found on human skin. 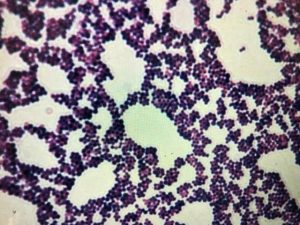 Four factors (blood, sweat, time and water) explain why S. epidermidis was the predominant bacterium on the body of Jesus prior to burial in the shroud. The New Testament gospels provide details regarding the entire day of the Crucifixion of Jesus. He was arrested early in the morning, brought to trial and convicted. He was then beaten, scourged, and crowned with a cap of thorns.

So before Jesus begins his journey to Calvary, his entire body was coated with his blood, from head to feet. The head wounds would tend to bleed somewhat faster than wounds from the scourging, which would ooze periodically depending on pressure at those sites, which numbered over one hundred.

The presence of fresh and partially clotted blood would have important consequences for the bacteria on the skin of Jesus. Whole blood provides  all  the nutrients needed for the growth of S. epidermidis. Not surprisingly then, a blood agar plate is the medium of choice for growing S. epidermidis today and a variety of other bacteria found on human skin. In the slide below, a pure culture of S. epidermidis was inoculated and streaked for isolated colonies. Therefore these white colonies of growing S. epidermidis would have been expected to be isolated from the skin of Jesus.

Back to the question of why S. epidermidis would be the major bacterium found on the skin of Jesus prior to burial in the shroud. The overall ordeal of the Crucifixion including carrying the crossbeam (patibulum) would result in massive sweating episodes by Jesus producing as much as 2-4 liters per hour. Human sweat contains sodium,  potassium, calcium and magnesium salts among other elements. The accumulation of sweat components on the skin surfaces over several hours would lead to massive levels of these salts and have significant consequences for the resident skin bacteria.

The salt-loving halophilic staphylococci on the skin surfaces, however, would grow unrestricted and increase in numbers on the blood secreted from wounds and abrasions. In this regard, the inhibitory effect of salt (7.5%) has been utilized in a culture medium (Mannitol Salt Agar) to select for staphylococci shown in the following slide. While the vast majority of other skin bacteria are inhibited by high salts in the medium, S. epidermidis grows readily and can be distinguished by its inability to ferment mannitol (pink color) while S. aureus, the pathogen, ferments mannitol and turns the medium yellow by the production of acid.  There are other high salt-containing culture media available to the medical microbiologist to select for staphylococci. These facilitate rapid identification of staphylococci in wound infections and in bacteremia and septicemia cases involving the staphylococci.

At this point it is important to appreciate the unique characteristics of the Crucifixion of Jesus. Normally when bleeding occurs on the human body, efforts are made to remove the blood quickly and deal with the injury. This was certainly not the case with Jesus’ ordeal. His blood completely coated his body as he made his way to the cross and while on the cross. As long as he was alive, his body maintained an optimal temperature (37 degrees C) for the growth of S. epidermidis. 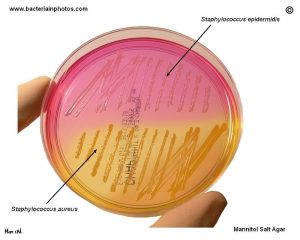 A third element explaining why S. epidermidis was the major bacterium on the skin of Jesus was time. The optimal growth rates or doubling times vary greatly among skin bacteria. The fastest growth rates of skin bacteria in culture media containing rich nutrients, such as blood, are in the range of 30 minutes. These include the streptococci and staphylococci which double in numbers every half hour. Another common bacterium on the skin is Propionibacterium acnes which doubles every 5 hours. Others may  require days to grow and divide once or twice. So the range varies from approximately 30 minutes to days for bacteria residing on human skin. Since streptococci are inhibited by salt from the accumulated sweat, only staphylococci and S. epidermidis, in particular, would be present in elevated numbers.

Water is the fourth element ensuring the presence of extremely elevated levels of sticky S. epidermidis on the surface of the crucified body of Jesus. Following  the removal of the body of Jesus from the cross, preparation for burial before the approaching Sabbath involved washing the disfigured and grossly contaminated body with water. Pathologists examining the Shroud have established the certainty of washing the body before wrapping in the linen shroud. Based on these findings, I attempted to wash my S. epidermidis contaminated hand with water as described in The Jesus Microbiome. Because of the ability of S. epidermidis to bind tightly to my skin, all that I accomplished was to spread it evenly over my hand as shown in the following figure. 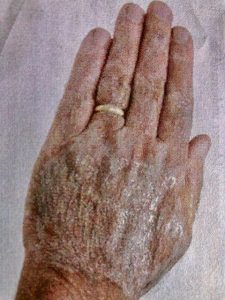 This observation should not be surprising as this S. epidermidis was originally isolated from the skin surface of my hand. This is where it lives. Thus the washing of Jesus’ body with water would have produced this viscous white coating over his entire body including his hair. Dirt, blood, insects, twigs, bits of clothing and other debris would have been removed by the washing procedure with water but not his own sticky skin bacteria S. epidermidis. The viscous nature of the white material is due to water bound by the extracellular polysaccharide produced by this bacterium. It  is also the “glue” that binds S. epidermidis to our skin.

As the linen shroud was placed over Jesus’ body in rigor mortis, the excess bacteria and associated polysaccharide glue bound tightly to the water seeking linen and as drying occurred the linen was drawn tightly to the bony emaciated body. Upon removal of the linen from the body, the dried excess bacteria and skin cells were exposed to air (oxygen) resulting in the oxidation of unsaturated fatty acids associated with the membranes of all cells and producing the straw yellow “Instagram from the First Century.”

No comments to show.